With 15.8 million viewers tuning in for its Season 5 finale, AMC’s The Walking Dead (TWD) is a bonafide television phenomenon that gets bigger every year. So how did a show created by a small network earn such a huge marketing share? It was hardly an accident.

From promotion to plot points, The Walking Dead is chock full of marketing lessons you can use.

1. Connect with Your Audience

The key demographic for The Walking Dead is adults aged 18-49 and capturing their attention meant delivering a lot more than blood and gore. Zombies have been done to death (no pun intended). Creators knew the plotlines had to be engrossing and the characters engaging, complex, and utterly relatable. As a result, the show is not so much about what happens to the characters as it is about how the characters react to each new threat or scenario. And with such a diverse cast, there are characters we can each relate to.

The marketing lesson: Show creators engross their audience by addressing their fears, pain points, strengths, and weaknesses. They pull the audience into the story. Sound familiar? It’s the goal of social media.

One thing TWD creators do exceptionally well is deliver an integrated experience. Viewers are invited to go online during the show and interact via quizzes, trivia delivered in real time, Twitter chats attended by the social media team, separate mini-shows you can only see online…it’s the first truly immersive TV/online integration. The Walking Dead finds its audience everywhere and encourages them to get involved, to interact. When not filming, the cast is attending conventions, making appearances, and generally being everywhere the fans are. There’s even a talk show to discuss the show after it airs, The Talking Dead.

The marketing lesson: TWD uses the phrase “multi-screen experience” to describe the interactive audience participation during the show. Marketing a multi-screen experience might include social presence that asks visitors to participate and rewards them for doing so. TWD viewers are rewarded with additional content, answers about their favorite stars, and contest participation. Some lucky fans are even chosen to be part of the show.

Fans are invited to zombify themselves by uploading a picture to their app and photos are chosen for a shoutout during The Talking Dead—instant recognition for loyal fans. Tweeted questions and comments are read on the show, giving watchers inside access to characters, producers and whoever else might be on the couch.

The marketing lesson: Users love to participate…and they love to be featured. Make your users part of the experience with retweets, shoutouts, contests, and UGC opportunities to participate.

4. Use the Power of Storytelling 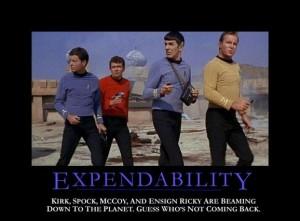 The Walking Dead is successful because it delivers unexpected stories that punch fans right in the gut. There are occasional red shirts, but the producers aren’t afraid to kill off central and sympathetic characters as well.

The Walking Dead lets you get to know the cast and fans tune in every week because, let’s face it, who wants to find out on Twitter that Beth died? Their storyline is exciting, dramatic, terrifying, and always compelling.

The marketing lesson: Tell a powerful story that keeps fans and followers coming back to see what’s going to happen next. Killing off your central characters may not be practical, but surprising your audience by doing cool things is completely within your grasp.

The Walking Dead is killing it on social media, with an active presence on Twitter, YouTube, Instagram, and Facebook. Instead of trying to dominate every social channel, they identified the areas where they’d find the most fans, and they use those to great advantage. It seems like kind of a no-brainer that TWD fans will respond best to visual stimuli and the TWD social media teams clearly know it. Most of their content is pretty, uh, gutsy.

The marketing lesson: You can’t be everywhere. You’re much better off identifying where your audience can be found and what kind of content they are most likely to respond to. Concentrate your efforts on social media that gets results.

With each season, circumstances change. During the first season, the writers evidently thought it was a great idea to live in tents. Sounds legit.

Then they moved the tents to Herschel’s farm, a marginally better idea, although by this time, you’d think they’d start working on a fence or something. It’s been a slow build, though, when you look back. Each season brings new dangers, new living arrangements, and new characters, and our heroes adapt. Season 5 returned them to near-normalcy. Homes, running water, chocolate chip cookies, all the comforts of home. Well, almost.

The marketing lesson: Don’t get comfortable. Your competition is always just on the other side of the wall, waiting to snatch away everything you’ve worked for. Keep your edge nice and sharp and be ready to adapt to the next change. Your walker herd might be a Google algorithm change, a powerful new product on the market, or simply a company with a better marketing plan. As long as you’re on your toes, you’ll survive.

The Walking Dead cast members are well balanced. Some are protectors, most notably Rick, Daryl, and Michonne, quick with weapons to keep the group safe. Some are procurers, adventurous souls like Glen always willing to risk their lives to gather necessary items for the team. Some are builders, who help keep the settlement going by doing the necessary labor. And there are always sympathetic, compassionate souls who balance the horror and inhumanity with gentleness and an unshakable moral compass. They always die, of course. But for a while they sing, or pray, or hold on to hope that the walkers might somehow be cured. We have even been introduced to a few self-serving cowards who save themselves no matter what the cost.

The marketing lesson: Know your team’s strengths and weaknesses. Never send Eugene to do a Tyreese or Daryl-level job. It will not end well. Put your people where they will do the most good and your team will operate efficiently.

8. Take Chances and Have a Backup Plan

There’s always a risk when you welcome new people into the group or decide to enter a new town. You never know whether you’re stepping into a stable community or if you’ll wind up as the featured entree for the next community dinner. Rick and his plucky band of survivors are always cautiously willing to branch out, lend a helping hand, and explore new territory. It doesn’t always work out, but they know when to pull back.

The marketing lesson: Try new things, but always have a fallback plan. Carol isn’t always going to be lurking in the woods to save your hides at the last minute, so be prepared to change strategy if a plan goes horribly wrong.

Planning and strategy are key. Alexandria feels safe and secure, but Rick’s crew knows the danger of complacency. They have a big-picture outlook, as opposed to the people who have lived safely inside the walls.

The marketing lesson: Never rest on your laurels. Even when things are going well, you need to keep your eye on the future and make sure your plan includes contingencies.

When you visit AMC’s The Walking Dead website, you might expect to find the usual: Cast bios, episode recaps, merchandise, clips, maybe even a few full episodes. And you will.

Plus a blog and an active fan forum.

The marketing lesson: If you have a piece of content that’s a hit, expand on it. Offer content in various formats, break it into smaller pieces, and highlight important bits. Create related topics. Once you know what your fans want, give them as much as they want to see, in every conceivable format.

Whether or not you’re a fan of The Walking Dead, you have to respect their marketing machine. They know exactly how to grab their viewers’ interest, feed them exactly what they crave, and leave them hungry for more.

2 Responses to 10 Killer Marketing Lessons from The Walking Dead